How does an ACL tear happen?

Anterior Cruciate Ligament (ACL) tear is a common injury with an estimated 200,000 occurring each year in the US.1 The ACL connects the bottom end of the femur (thigh bone) to the top end of the tibia (shin bone) in such a way that it helps prevent the lower leg from moving forward relative to the thigh and from twisting inwards towards the midline. An ACL tear can have significant effects on the way your knee moves, with instability typically being the primary problem. ACL reconstruction (ACLR) surgery aims to surgically recreate the anatomical function of the ACL, however there is a growing body of evidence that surgery is not the only option.

Do I need surgery for an ACL tear?

Previous theories favoured ACLR over conservative management due to a belief that reconstruction would prevent development of osteoarthritis (OA) in the knee and further meniscal damage. More recent research has since debunked this, showing that ACLR does not show decreases in OA at 20 years post-surgery and that OA changes are 4-6 times more likely to occur in the 10 years following an ACL tear regardless of treatment choice.2,3,5 Additionally, there has even been research showing that a torn ACL can actually heal over time.4

After a period of rehab involving intense strengthening, neuromuscular control, balance, and sport specific training, some people are able to recover from the initial injury and are able to function normally without an ACL (referred to as copers). One of the most famous examples of this is DeJuan Blair, who managed to play 8 seasons in the NBA with no ACL in either knee.

Other patients continue to have episodes of knee instability (referred to as non-copers). Non-copers may be able to function in normal daily activities without an ACL, however high-demand sporting activities (cutting, pivoting, sudden turns) may prove to be difficult, and it is thought that for non-copers ACLR is necessary to stabilize the knee.

Knowing that surgery may not be necessary, here are some of the questions that need to be considered before making a decision:

• Have you done a period of supervised rehab?
• Are you experiencing knee instability?
• Are you trying to return to a sport that requires cutting/pivoting/sudden turns?
• What kind of commitment are you able to make to your rehab?

While the last point may look a bit out of place, it’s as important of a consideration as the first three. Recovering from an ACL reconstruction surgery is not an easy process. It takes months of dedicated rehab and hard work. As such, it’s critical to ensure you are able to create space in your life to commit to the rehab process. While I’m lucky enough to live in a country where surgery is covered by health insurance, the cost of medical equipment (crutches, cryocuff rental), physiotherapy, and time off work to recover from surgery can quickly add up, meaning that surgery also requires a significant financial commitment.

Current clinical guidelines state that a period of rehabilitation should always be offered prior to surgical reconstruction. Research has shown that this prehab phase can reduce ACL surgery by up to 50%, and after this, if someone is still struggling with instability then surgery remains an option.6

Should I do prehab before ACL surgery?

For those that do decide to get surgery, I would argue that comprehensive prehab is the most important thing you can do in preparation. Most surgeons prefer to wait until swelling resolves to perform an ACLR and this can take several weeks. So, it is a perfect time to prepare for surgery, build up the capacity of your muscles to minimize the effects of the injury, and prepare mentally for post-op rehab. Research has demonstrated a six-week prehab program results in better objective knee function as well as self-reported measures of knee health.7

Surgery for a torn ACL

ACLR involves removing the damaged ACL and replacing it with muscle tendon. Tunnels are made in the shin and thigh bone and the graft is passed through these tunnels to “reconstruct” and secure the ligament in place. The graft is typically made from either hamstring tendon, patellar tendon, or donor tissue (other grafts such as quadriceps tendon are used but less commonly so). While most surgeons will prefer one type of graft over another, there is currently no scientific evidence pointing to one as superior than the others as they all come with their pros and cons.

Patellar tendon grafts closely resemble the ACL and having bony attachment sites included in the graft allows for “bone-to-bone” healing which is often considered to be stronger. However, removing 1/3 of the patellar tendon for the graft does increase the risk of future patellar tendon problems as well as commonly being associated with pain in the front of the knee. Patients may have complaints of this pain, especially when kneeling, even years after the surgery.

Hamstring tendon grafts have a smaller incision to obtain the graft and do not have the same bone removal as patellar tendon grafts. As a result, the pain in the immediate post-op period as well as down the road tends to be lower. However, the lack of bone-to-bone healing results in the graft needing a longer period of time to become rigid and therefore requires a longer protective period.

The use of a donor tissue or allograft allows for a shorter operating time, no need to remove other tissue for the graft, smaller incisions and less post-operative pain. However, these grafts have been shown to be weaker than if the patient had used their own tissue for it. For many patients, the strength of an allograft is sufficient to meet day-to-day demands and therefore makes it an excellent option for non-copers who are not planning to participate in high-demand sports.

Following surgery, the long road of recovery begins. Progressive rehab allows the graft to slowly be worked into place within the knee. Slow progression of exercises and early protective phases allow the body to gradually cement the graft into place. In the first 2-4 weeks, the risk of the graft being pulled out of place is high due to the fact that it has not yet incorporated into the graft site.9 After about four weeks, the graft is more solidly in place, however, it is remodelling on a cellular level to become more like a ligament. As a result of this, the graft is mechanically at its weakest around 6-12 weeks post-operatively. Coincidentally, people start feeling a lot better around this point and are keen to do a lot more, making this one of the highest risk times for re-rupture. Here, there is a delicate balance between maintaining load in the knee and the muscles but doing so without compromising graft integrity.10

The final “ligamentization” phase involves continuous remodelling of the healing graft as it becomes more and more like an intact ACL. A clear endpoint is not known, but changes have been observed years after reconstruction. Changes to blood flow and collagen organization appear to cease between 6 and 12 months and mechanical properties of the graft improve substantially during this phase, reaching their maximum at around one year.11

Current best practice in rehab suggests the use of criteria-based protocols, meaning that someone can only graduate through each level of therapy when they’ve proved they are ready to, rather than based on a strict schedule. Regardless, the above shows that tissue healing times need to be respected and as such a minimum of nine months is suggested before returning to sport. Research shows that for every month that return to sport was delayed (up to nine months) there was a 51% reduction in injury.12

Do I need to wear a knee brace after ACL surgery?

The use of a knee brace following an isolated ACL tear remains controversial (cases where there is additional damage to other structures in the knee such as the meniscus or MCL require different management). Many surgeons recommend the use of a brace during the initial 3-6 weeks following surgery with the thought that it will reduce pain, protect the graft, or maintain knee extension, however there is some concern that immediate bracing post-op may not be necessary, or further that it may pose a risk of harm due to muscle atrophy and associated losses in function and proprioception.13 Additionally, a 2013 study comparing those who did and did not use a knee brace post-operative found no differences in ligament integrity or injury rate, and the patients who did not use a brace after surgery reported less pain during sports or heavy physical work activities.14

Returning to sport after an ACL tear

Once you’re out of the early protective phases of ACL rehab and have demonstrated sufficient healing, strength, balance, and control, your rehab should begin to include sport specific drills. ACL rehab must be highly individualized – it is not enough to just have a strong and stable knee at the end of rehab. People need to feel confident and mentally ready to return to their specific sport and this only comes from practicing those specific movements.

Common return to sport criteria include (but are not limited to):

A 2016 study12 used these criteria to assess the outcomes of 106 competitive athletes post ACLR and they found the following:

Recovery from an ACL injury needs to be highly individualized. Two people with the same injury may have very different rehab programs based on what kind of activities they are aiming to return to and how their body copes with the injury.

A period of rehab should always be done after an ACL tear. ACL reconstruction surgery is indicated for those who want to return to high risk activities but still struggle with functional instability after a period of supervised rehab.

For those that do get surgery, a minimum of nine months and successful completion of return to sport testing is associated with the lowest risk of re-injury. 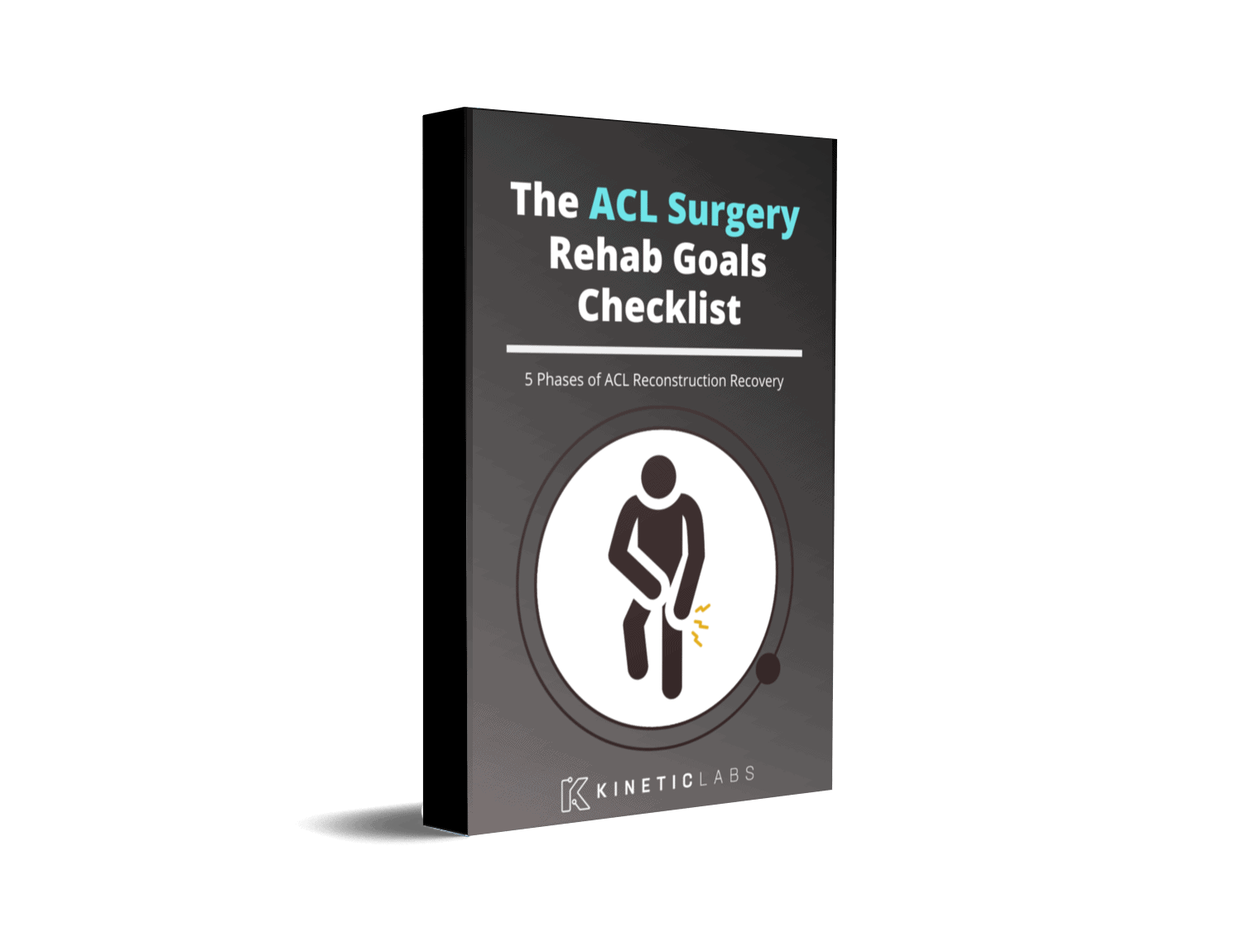 Learn about the recovery milestones for each of the 5 phases of ACL rehab.

no thanks, i'm good